To receive our latest news,
subscribe to our newsletter:

Your email address is only used to send you the news of the Percussions de Strasbourg. You can unsubscribed at any time using the link included in the newsletter. 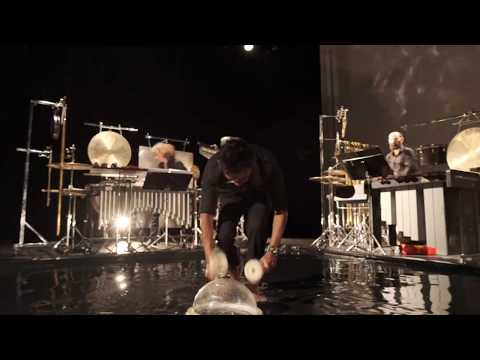 Drum-Machines, the 2nd recording made and produced under the label Percussions de Strasbourg, marks an important turning point in the approach of the ensemble, that of the 4th generation. At the junction between contemporary and electronic music, Drum-Machines was created following a process of dynamic composition: the performers first proposed sound materials on two research residencies and then eRikm ensured the composition, the music production and mixing.

In presence of the composer.

Masterclass for participants of Philippe Manoury’s Academy composition in Musica ...

3 hours meeting for young composers about writing for percussion in all its forms.

- Short presentation of the group

- Presentation of some well-known or specific instruments with different approaches, sticks, effects… :

> Basic presentation of different mallets, sticks, fingers, objects and other material we use for hitting, rubbing and sometimes blowing (in a shell for example)

Les Percussions de Strasbourg & Ensemble Arcantus The bread of death and the bread of life ...

Continnum was premiered at the Stockholm Festival in 1966 and was not heard in Poland until the 1972 “Warsaw Autumn”. The work is dedicated to the famous ensemble Les Percussions de Stasbourg.

As we can read in the commentary on the score, “the ensemble should be placed in the concert hall in a way that would enable all performers to see each other”. This is by no means a trivial matter, for the composer uses no fewer than 123 percussion instruments in his work. Tadeusz A Zieliński divides them into five categories, according to their sound characteristics:

2. gentler sound of membranophones such as congas, tom-toms, bongos, tambourines;

4. “sonorous” sounds made by bells, crotales, triangles, cowbells or bottles;

The instruments are placed around the audience in six groups played by six performers (the composers also allows, albeit reluctantly, a stage version of the performance), but they are not segregated – each percussionist uses all types of instruments mentioned above. As a result the listeners are surrounded by sounds of various hues. Even if just one type of colour dominates at some point, it reaches the ears from all directions. On the other hand, when the colours change quickly, the listeners keep hearing contrasting sounds from different directions.

The sonic variety in Continuum  is very sophisticated, because Serocki uses many unconventional means of producing sound, e.g. trills, glissandi, clusters obtained by means of special broad sticks, hitting the edges and sides of the instruments, playing with fingernails etc. This produces very attractive auditory phenomena, at times eerily similar to electronic sounds.

The form of the piece is precisely defined – 36 short sections varying in terms of sound and expression, put together in accordance with the principle of contrast, a decision that does not allow the listeners to become bored even for a moment. We can distinguish here four phases: the first two making up a kind of exposition of all colour possibilities, the third one, being the longest and the most dramatic, and the finale – “joyful and orgiastic explosion of various types of timbres, mixed in bright tutti and ending with a series of powerful, synchronised chords […] by all performers”.